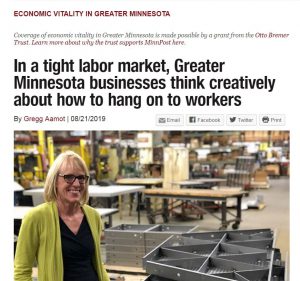 Finding creative ways to promote careers in manufacturing and address the shortage of skilled labor is something we’ve worked hard at for many years.  The cover story of this recent issue of Minnesota Business Magazine focuses on out-of-the-box thinking for smart hiring in a tight labor market.  Co-President Traci Tapani was interviewed for the article and she shares how we develop people within our organization using teamwork, technology, and tenacity!  (click here for the article – page 28)

Look up “quick study” or “compassion” in the dictionary, and if WMI Co-Presidents and sisters Lori and Traci Tapani had their way, you’d see a picture of Linda Miller, WMI’s office manager and 27-year employee. Linda’s concern for others—whether as employee, civic leader or volunteer—shines through all that she does.

In 1990 when Linda began her career with Wyoming Machine she was hired to enter customer orders and file blueprints. It was evident from the start that Linda had both the capacity and desire to learn new things and take on additional responsibilities.  As office manager (since 1999), Linda keeps WMI running smoothly. She is responsible for all financials, safety and OSHA, visitor tours, company parties and much more, but her passion for learning amazes all. After just one computer class Linda continued absorbing all things computer. Now Linda also manages IT.

And while her intelligence keeps WMI going, it’s Linda’s heart that keeps WMI glowing. For example, when Linda heard that an employee was struggling with a health insurance claim, she immediately called the company to resolve the issue. That’s just her style—the quintessential compassionate go-getter—and everyone at WMI knows it.

According to Traci Tapani, “Linda is an amazing person. She has taken the skills she has gained through her work as our Office Manager and used them to benefit her community. She cares deeply about people and she is very generous with her time and talent. Our community is better because of her.”

Linda’s caring attitude has given her leadership roles at church and civic causes, too. When her daughters were in Girl Scouts, Linda became a scout leader. “Whatever the kids are involved in, I am, too,” Linda said. That means, add sports, music and many other of her daughters’ endeavors to Linda’s volunteer list.

As a 34-year member of St. John’s Lutheran Church in Stacy, Linda has served as president of its council among other positions. Linda believes church mission trips to Ohio and Kentucky were especially rewarding. In those trips, church youth helped rehab condemned homes people lived in. “There were lots of tears from workers and residents when the homes were restored to code, allowing families to stay. These trips let my daughters and our youth see just how difficult some people have it. The kids returned home changed people,” Linda said.

Linda is also an election judge and treasurer of the Stacy Lions Club. But perhaps one of her most moving volunteer activities is the Heartley Bear Program. This program helps survivors grieve the loss of a loved one by converting their clothing into a teddy bear.

The program began when the funeral director of Forest Lake’s Mattson Funeral Home, Paul Hutchison, and his siblings, struggled with the death of their grandfather, Hartley. As they gathered his clothes, Paul saved his grandpa’s favorite flannel shirt and jeans. Paul’s grandmother made a teddy bear from the clothing for each grandchild. The process was so comforting that in 2009 Paul established the Heartley Bear Program at their funeral home—for anyone who has lost a loved one.

Two to three times a year Mattson Funeral Home becomes a teddy bear “factory.” Volunteers help survivors create teddy bears while healing their hearts. According to Linda, survivors bring in their loved one’s favorite garment. Volunteers then give survivors a pattern and scissors to cut out teddy bear parts. “That’s when the tears flow and grieving begins,” said Linda. “There’s something about cutting into the loved one’s clothing that triggers deep-felt emotions.” As they cut, they share stories that help replace sheer grief with treasured memories. Another volunteer crew then sews pieces together and returns them to be stuffed.

“They love their bears,” said Linda. “Not everything is perfect—definitely not store-bought. Sometimes the characteristics resemble the person who passed. It’s what survivors envisioned.” At the day’s close, survivors have their picture taken with their bear and sometimes with volunteers.

Linda’s most poignant occasion was when their own pastor’s wife came in. Their pastor of 24 years suffered a heart attack and died while driving to confirmation class. “We were so close to him after all those years.” It was a cathartic experience that brought them together with tears and stories. Linda said the love in the room was palpable.

The Heartley Bear program has been an astounding success. In 2009 the National Funeral Directors Association, with 10,000-plus members, named Mattson Funeral Home one of five homes across the country to receive its “Best of the Best Award.” Now funeral homes and other organizations across the country have similar programs. In 2012, President Obama issued The President’s Volunteer Service Award for the Heartley Bear program. In the eight years Linda has volunteered she has missed only three sessions—two were for the weddings of her daughters.

As you may have guessed, Linda’s daughters are also compassionate, successful young women. Paula graduated from Augustana University—Sioux Falls, and is an RN who also served in the Peace Corps. Crystal graduated from Concordia College—Moorhead with a music degree. Linda and husband Doug are now empty nesters enjoying their grandson and awaiting the arrival of another in December. But don’t expect Linda to slow down any time soon. Besides WMI, there’s always someone—or an organization—that needs her help—and she’s more than eager to assist.

When people order a part from Wyoming Machine, they usually think quality, timing and price. What people seldom think, is just what it takes to make a part that meets exacting specifications. Lori and Traci Tapani, Co-Presidents of WMI, recently got a fresh reminder of that when Jacob Krautkremer, a Roseville, Minn., high school industrial technology teacher, spent three days with Wyoming Machine. He came to absorb what metal fabrication entails, from start to finish. According to Jacob:  “I had no idea how many people it takes to manufacture a part. So many people need to work so well together to create a perfect part.”

WMI employees from the Tapani sisters and engineering, to production, quality control and packaging, eagerly assisted Jacob. He even toured a WMI vendor’s painting facility.

Jacob’s internship was made possible via funding from the Perkins Career and Technical Education Act IV, passed in 2006. Its purpose is to fund programs to enhance secondary and post-secondary education and career development for technical education. Funding is channeled to career and technical education consortiums across the country at the secondary and post secondary levels. Jacob’s internship will help him develop a manufacturing curriculum for Roseville High School which he will lead, pending the passage of a bonding bill.

According to Jacob, “We’re even hoping to include internships at manufacturers so our students get real world experience that will help them know if manufacturing is a viable option before they graduate.” These days Roseville schools are encouraging students to learn about careers as early as seventh and eighth grade beginning with student interest surveys.

Wyoming Machine at the Forefront

WMI has sent employees to share manufacturing career experiences with eighth graders in area schools. And school tours at WMI? For many years. In fact, the Tapani sisters are national leaders in workforce training and development having won numerous national honors. It’s all a part of helping students find good-paying careers without a four-year degree. It’s also about filling the Manufacturing Institute’s estimate of 2,000,000 manufacturing jobs going unfilled in the next 10 years.

Such efforts are beginning to pay off. Pine Technical and Community College (PTCC) in Pine City, Minn., is experiencing record enrollment this fall. President Joe Mulford believes that the increased emphasis on uniting high school and technical college teachers with employers is creating better curricula and more inspired students. The increased enrollment is proof of that.

PTCC even “shares” equipment with area high schools. “We take it to them,” said Joe. “We load it in a trailer—lathe, mill, desktop CNC controller—for student exposure. They keep it for a month to try it out. No one school can purchase it all. But in a region—we can help all. We share curriculum with people, host technical education events, and bring possibilities to small schools that wouldn’t have previously dreamed of such a thing. We’re all coming together.”

Employee growth is also a factor. “The Tapani sisters have made employee development a part of their soul. It’s a foundation of their company,” Joe said. “You can get a job, but if you want a career, you’re going to need training,” Joe said. PTCC’s enrollment has increased so much that they’re adding night classes for their advanced manufacturing major. Everyone wins.”

In fact, Wyoming Machine hosts virtual classes on Interactive Television (ITC) from PTCC for employees wanting to advance their careers. They can learn and earn degrees without commuting to PTCC.

The biggest surprise for Jacob? Size and speed. ”I knew it would be high-tech, but some equipment was as big as my living room—humongous! These are automatic and hydraulic operated machines. We use hand tools,” said Jacob. The capabilities nearly dumbfounded him. Employees demonstrated their standard brake press, and then showed Jacob their new CNC model with automatic tool loading. “It was shocking. Whereas the old press took maybe 30 minutes to prepare for a run, the new CNC press was ready in less than five minutes.”

While few high schools will have the large machines Jacob saw, Jacob learned plenty about things he can teach. Welding and blueprint reading are two good examples. “If my students are reading blueprints and know how to do the small stuff,” Jacob said, “they can learn the big stuff.”

Jacob’s biggest take-away? “Given all the people involved in producing a part, I now know my students will have to learn to work well together…Students need to learn efficiency—time is money in manufacturing,” Jacob exclaimed. “So my trip to Wyoming Machine was a real eye-opener,” Jacob said.

It’s no secret that technical college customized training is a life-saver for manufacturers. What you may not know is that Lori Tapani and Traci Tapani, Co-Presidents of Wyoming Machine, helped make that happen in Central Minnesota. Now they and their employees—are reaping the benefits.
For 21 years, Lori and Traci have worked closely with Pine Technical and Community College in Central Minnesota. END_OF_DOCUMENT_TOKEN_TO_BE_REPLACED

From Homeless to Happy: Robert Bjoraker’s Ascent at Wyoming Machine

Remember Robert Bjoraker—the husband and proud father whose family was homeless at one point? Wyoming Machine Inc. hired him as a part-time custodian three years ago. But Traci and Lori Tapani believe in employee growth, training and promoting from within. In fact, they’re now national leaders for that practice. As a result, Robert has advanced to the highly technical position of laser cutter. END_OF_DOCUMENT_TOKEN_TO_BE_REPLACED

The surprise about WMI’s recent tour for nine Metro Deaf School high school students and three staff was that the event was as rewarding for employees, and owners, sisters Traci and Lori Tapani, as it was for students. END_OF_DOCUMENT_TOKEN_TO_BE_REPLACED

Robert Bjoraker and his family were struggling to get comfortable for the night in their extended-cab truck in below-freezing temps. “It was a sinking feeling,” said Robert. “I truly did not know what we were going to do. END_OF_DOCUMENT_TOKEN_TO_BE_REPLACED