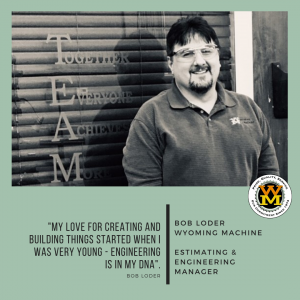 ENGINEERING IS IN HIS DNA – Bob’s love for creating and building things started when he was very young and has continued in both his professional and personal life.  His father was an engineer at 3M and always had a machine shop in his garage or workshop.  Bob was helping his father design and machine parts before he entered his teenage years.

While in school Bob took all the shop classes that were available and was offered a machining/engineering internship at 3M in Austin, Texas after graduation.  Although he was primarily a “gopher” in his position, Bob was exposed to the design and manufacturing process – and he was hooked!  Bob earned an Associate Degree in Machine Tool Processes/Tool & Die Mold Making at Saint Paul College and went back for an additional semester to learn CNC programming.

Bob spent 17 years at a manufacturing company that built analog prepress equipment for the offset printing industry.  He was originally hired as a machinist but was quickly promoted to the machine-building/assembly area.  Bob feels that accepting this challenge is one of the best decisions he ever made because he was able to machine components AND build things!

Bob shared, “As my career progressed, I had some very good mentors that gave me advice and opportunities as a leader and a manager.  It also groomed me to serve as a mentor for other people.”  Eventually, Bob was promoted to the Manufacturing Manager position overseeing machining, welding, painting, electrical assembly, and mechanical assembly.  Production planning, inventory control, purchasing, production, customer service, quality, and shipping were added to Bob’s list of responsibilities in the final years that he held the position.

Bob joined our team at Wyoming Machine in 2009 after his previous employer dissolved in the wake of digital printing equipment replacing analog systems.  Instead of being a user of sheet metal components, Bob became a sheet metal supplier.  In 2012, Wyoming Machine combined the Estimating and Engineering departments into a unified team.  Communication is key between these two groups and having them together allows them to work closely from the start of the quoting process, through the creation of production documents, to the actual production of components.

“Manufacturing is manufacturing no matter what you are producing.  If you provide quality items and maintain great customer and vendor relationships, you can do anything.” – Bob Loder

Bob gives much credit to his team saying, “In my opinion, the team of engineers and estimators at Wyoming Machine are unmatched in the industry with their years of experience and dedication.”  With a combined total of 206 years of experience in sheet metal fabrication, Bob and his team are here to help you with your next project!

The Tapani Sisters, Once Again, Host Policy Makers and Influencers at WMI